When to Fire a Client 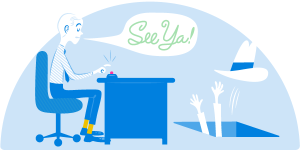 Over the course of my career, I’ve had the pleasure of working with some truly amazing clients. Many have become good friends. But I’ve also run into the occasional client who has been less than ideal to work with–they’ve kept me up at night, churned my stomach and made me wonder whether it’s worth it to keep them.

I’ve also seen many of my clients endure hardships with their clients! Today I’ll review personas of four common “troublesome” clients. First I’ll share some approaches for salvaging the relationship–and the revenue. And then discuss when it’s time to cut your losses and fire them.

The dictator client is extraordinarily demanding. He’s calling at midnight. Your work is never good enough; and he always expects out-of-scope work for free. You cringe every time you receive an email from him. Some dictators can even be downright mean.

I think it’s important to first recognize that dictators often behave the way they do, not because of ill will, but because they honestly don’t know what you consider to be reasonable work parameters. They may just be quite ignorant about work norms in your field, or they may have developed bad habits from working with other, more pliable, contractors.

So, the way to improve your working relationship is to educate your client on what works for you. Clearly explain what you’ll be able to accommodate and what you won’t … whether that’s your work hours or what’s in-scope. One of my clients, who recently had a boundary-setting conversation with a dictator, was pleasantly surprised when her client apologized profusely and happily went along with the new arrangement. It’s also a good idea to offer options for how they could get more of what they want (see, for example, my article on responding to freebie requests).

If, despite your requests, the client refuses to respect your boundaries, it’s time to bail. Continuing the project is likely to hurt or destroy your (and your team’s) morale. I’ve also seen it destroy relationships and lead to employee resignations. And, often, your other clients suffer because you’re distracted and not giving them the attention they deserve. Bottom-line: retreat from the dictator’s territory, and keep your allied clients happy!

The deadbeat is the client who won’t pay, or won’t pay on time. Bad cases include a client who doesn’t respond at all to your invoice, even after the payment deadline has passed. Perhaps worse is the client who repeatedly says, “I’ll get you the money by X date,” and then fails to deliver–always with a new excuse.

From what I’ve seen, most unresponsive clients aren’t trying to cheat you. Usually they’re either (1) just super busy or (2) struggling with their company’s accounts payable bureaucracy. So the best first step is to make it as easy as possible for them to pay. For example, you could combine and add together all outstanding invoices or offer to accept a credit card. If it’s a budget issue, you can suggest an installment plan around their budget cycle.

It’s also helpful to consider how checks are cut by your client’s company. For a client who writes checks herself, I’ve successfully used: “I’ll be in your neighborhood Tuesday morning, would it be okay to come by around 10am to pick up my check?” If invoices have to go to an accounting department, ask your client for the contact info for the accounting person so you can go directly to the source. That is more efficient and also allows you to stop bugging your client.

If a client won’t pay their invoice after all your attempts to help them, stop working for them, if you haven’t already. I’ve seen too many companies continue to work for the deadbeat, long after they should have bailed. I’ve heard people cite faulty rationales like, “Well at least it’s work,” or “I’m sure they’ll be good for it eventually.” In the past I told myself similar excuses, until I wised up to see that it’s not work–it’s volunteering–and it’s a disincentive for the client to ever pay.

Mr. (or Ms.) Impossible is the one who asks you to fix another vendor’s bad work. At first you’re happy for the opportunity, but then you learn that there were actually three other vendors before that … and that Mr. Impossible fired all of them because “none of them were any good.” You eventually learn–usually when he fires you too–that the vendors weren’t the problem.

I advise my clients to gather as much information from the client about what went wrong with the past vendor(s) in order to sniff out a Mr. Impossible as early as you can. If you sense you’ve got one on your hands, I suggest not getting involved, even though it can be tempting to want to be the one who will finally make Mr. Impossible happy.

If you do take a “fix-it” project with a client you’re hoping will turn out to be reasonable, I suggest that you protect yourself by getting paid in full upfront. I’ve seen too many great people left unpaid because the client turned out to be a Mr. Impossible who didn’t like their work either. Also, be extremely explicit, in writing, about what you are planning to deliver. The less ambiguity there is about your role, the less friction there will be.

If you find yourself involved with a Mr. Impossible you can’t please, get out as out as soon as you realize who you are dealing with. This way, it’ll be you who ends the relationship, on your terms. You can follow the example of one of my clients who recently approached a Ms. Impossible and told her that he didn’t think the project was a good fit after all, and that he would finish up his part of the project, then bow out. Ms. Impossible appreciated my client’s proactive approach and the project ended amicably.

An MIA hires you for a project and then disappears. When you need information or approvals from them, you get no response. Even after you continue to follow up, you still get no response. Which is so weird, because it was so urgent when they hired you, and they paid a deposit. It’s frustrating, because you want to do the work and get paid the balance you’re due.

First of all, resist the natural tendency to take it personally–we often think the client must be upset with us, or unhappy with our work. But I find that it’s almost always just that they’re super busy, and focused on other priorities.

I’ve found the following two approaches often help to reengage the MIA client. First, reach out again and be clear and direct about possible consequences. If the project launch will be delayed, or a key goal missed, let them know. Second, make a response as easy as possible for them. Instead of asking for 5 pieces of information, ask for one at a time. Instead of asking for a meeting to gather their input, send an email saying, “This is what we’re thinking, okay to go ahead?” Another thing I’ve seen work is to ask for another person to be your point person (often a more junior person on their team).

If, after at least five attempts–including email and phone calls–to get your simple next step question answered, it’s time to take your foot off the gas. You rarely need to fully eject from an MIA client, but you do need to stop obsessing and reallocate that time to hunting for your next client. Create a calendar reminder and just check in with the MIA once a month. It’s likely that at some point, their priorities will change again, and they will be ready to reengage. Do send an invoice to get them paid up for whatever amount of the work is already done.

How have you dealt with troublesome client situations? What advice can you give our community on how to salvage the relationship, and when to cut your losses? Share your thoughts below.

How to Handle Requests for Freebies

How to Get Clients to Behave (and Still Love You)

7 Reasons to Turn Down a Project